AMD is a common eye condition and a leading cause of vision loss among people age 50 and older. It causes damage to the macula, a small spot near the center of the retina and the part of the eye needed for sharp, central vision, which lets us see objects that are straight ahead.

In some people, AMD advances so slowly that vision loss does not occur for a long time. In others, the disease progresses faster and may lead to a loss of vision in one or both eyes. As AMD progresses, a blurred area near the center of vision is a common symptom. Over time, the blurred area may grow larger or you may develop blank spots in your central vision. Objects also may not appear to be as bright as they used to be.

The macula is made up of millions of light-sensing cells that provide sharp, central vision. It is the most sensitive part of the retina, which is located at the back of the eye. The retina turns light into electrical signals and then sends these electrical signals through the optic nerve to the brain, where they are translated into the images we see. When the macula is damaged, the center of your field of view may appear blurry, distorted, or dark. 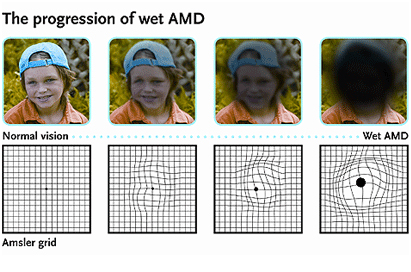 Age is a major risk factor for AMD. The disease is most likely to occur after age 60, but it can occur earlier. Other risk factors for AMD include:

• Smoking: Research shows that smoking doubles the risk of AMD.

• Race: AMD is more common among Caucasians than among African-Americans or Hispanics/Latinos.

3Does lifestyle make a difference?

Researchers have found links between AMD and some lifestyle choices, such as smoking. You might be able to reduce your risk of AMD or slow its progression by making these healthy choices:

4How is AMD detected?

The early and intermediate stages of AMD usually start without symptoms. Only a comprehensive dilated eye exam can detect AMD. The eye exam may include the following:

• Visual acuity test: This eye chart measures how well you see at distances.

• Dilated eye exam: Your eye care professional places drops in your eyes to widen or dilate the pupils. This provides a better view of the back of your eye. Using a special magnifying lens, he or she then looks at your retina and optic nerve for signs of AMD and other eye problems.

• Amsler grid: Your eye care professional also may ask you to look at an Amsler grid. Changes in your central vision may cause the lines in the grid to disappear or appear wavy, a sign of AMD.

• Fluorescein angiogram: In this test, which is performed by an ophthalmologist, a fluorescent dye is injected into your arm. Pictures are taken as the dye passes through the blood vessels in your eye. This makes it possible to see leaking blood vessels, which occur in a severe, rapidly progressive type of AMD.

• Optical coherence tomography: OCT can achieve very high-resolution images of any tissues that can be penetrated by light—such as the eyes. After your eyes are dilated, you’ll be asked to place your head on a chin rest and hold still for several seconds while the images are obtained. The light beam is painless.

5What are the stages of AMD?

There are three stages of AMD defined in part by the size and number of drusen under the retina. It is possible to have AMD in one eye only, or to have one eye with a later stage of AMD than the other.

• Early AMD. Early AMD is diagnosed by the presence of medium-sized drusen, which are about the width of an average human hair. People with early AMD typically do not have vision loss.

• Intermediate AMD. People with intermediate AMD typically have large drusen, pigment changes in the retina, or both. Again, these changes can only be detected during an eye exam. Intermediate AMD may cause some vision loss, but most people will not experience any symptoms.

• Late AMD. In addition to drusen, people with late AMD have vision loss from damage to the macula. There are two types of late AMD:

- In geographic atrophy (also called dry AMD), there is a gradual breakdown of the light-sensitive cells in the macula that convey visual information to the brain, and of the supporting tissue beneath the macula. These changes cause vision loss.

- In neovascular AMD (also called wet AMD), abnormal blood vessels grow underneath the retina. These vessels can leak fluid and blood, which may lead to swelling and damage of the macula. The damage may be rapid and severe, unlike the more gradual course of geographic atrophy. It is possible to have both geographic atrophy and neovascular AMD in the same eye, and either condition can appear first.

AMD has few symptoms in the early stages, so it is important to have your eyes examined regularly. If you are at risk for AMD because of age, family history, lifestyle, or some combination of these factors, you should not wait to experience changes in vision before getting checked for AMD.

6How is AMD treated?

Currently, no treatment exists for early AMD, which in many people shows no symptoms or loss of vision. Your eye care professional may recommend that you get a comprehensive dilated eye exam at least once a year. The exam will help determine if your condition is advancing.

As for prevention, AMD occurs less often in people who exercise, avoid smoking, and eat nutritious foods including green leafy vegetables and fish. If you already have AMD, adopting some of these habits may help you keep your vision longer.

Neovascular AMD typically results in severe vision loss. The condition may progress even with treatment.

• Injections: One option to slow the progression of neovascular AMD is to inject drugs into the eye. With neovascular AMD, abnormally high levels of vascular endothelial growth factor (VEGF) are secreted in your eyes. VEGF is a protein that promotes the growth of new abnormal blood vessels. Anti-VEGF injection therapy blocks this growth. If you get this treatment, you may need multiple monthly injections. A few different anti-VEGF drugs are available. 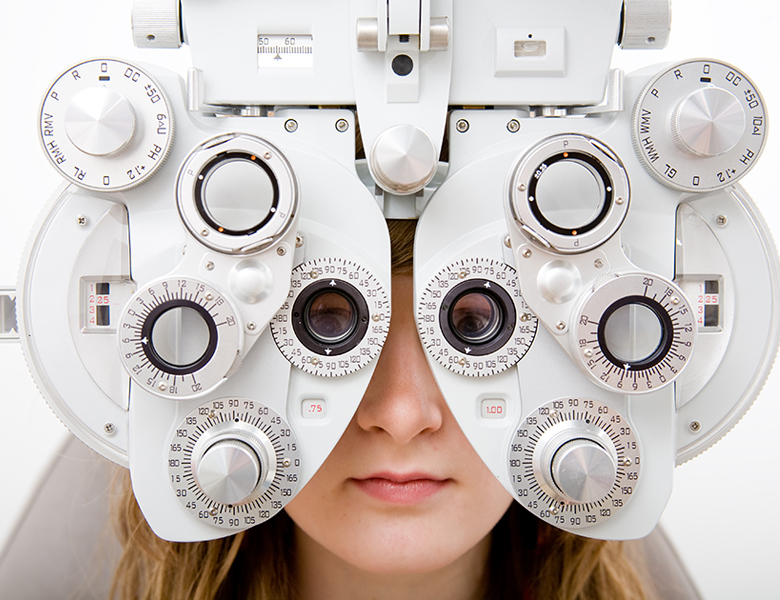 AMD is a common eye condition and a leading cause of vision loss among people age 50 and older.

Do you have AMD symptoms? Don't hesitate to reach out.